Yesterday was bitter cold but the sun was out and the sky was an intense blue. This time of the year it is usually cloudy, so I hadn’t raised my expectations to see the total lunar eclipse. But after a crimson sunset I was hopeful.
Sure enough, around 9 PM a little bite appeared on the moon. In the clear cold night air (9 degrees), the light of the moon was so intense that it was hard on the eyes to look directly at it. And that made the nearby stars difficult to see.
But as the eclipse reached totality the moon appeared as a glowing red-orange orb. It was easier to see details and get a sense of the moon as a sphere, rather than a bright source of light.
Suddenly the surrounding stars were much more apparent, and I recognized Leo. The moon was right at his feet, as if the giant cat was playing with a ball. And next to the moon was Saturn shining bright yellow.
The beauty of the night sky takes my breath away (as did the bitter cold). The phases of the moon dance in my dreams, and I am bringing their images to my art.
Posted by Daniel McPheeters at 11:14 AM No comments: 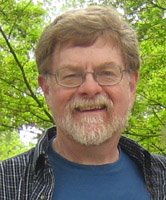